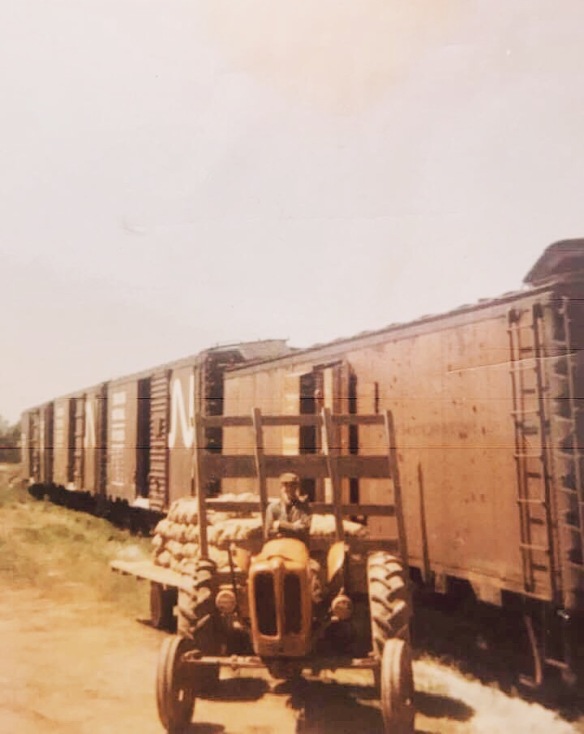 While looking for photos of tractors on The Prince Edward Island Railway Facebook page, I came across this photo of a reefer being loaded with potatoes at St. Peters Bay.

The author of the post incorrectly labelled it as the 1950s, but as we know by the noodles on the boxcars, this is post-1961. Further, the American reefer car’s presence makes me believe it might even be the late 60s or 1970s.

While this photo isn’t within my era, it really strikes some inspiration. The railway on PEI had many public sidings or team tracks- but not many of them had permanent loading ramps. The public siding at Vernon River did not have a loading ramp.

This scene might as well be Vernon River. It would be a very similar scene. The farmer or merchant backs truck or trailer right up to the car, plywood ramp bridges the gap, potatoes are transferred across- probably a lot of the time “hand-bombed

I am very grateful to find this picture. It will be used as a direct reference to develop the scene and the public siding.

As mentioned at the beginning of this post, I’ve in passing begun to research era-appropriate vehicles for the layout. My first purchase was an Alloy Forms 1947 Clark Forklift, which will live at the Co-Op Warehouse… I just need to figure out the proper colour to paint it.

I’ve mentioned this before to friends, and you may disagree, which is fine. Still, I really find that too many vehicles are the easiest way to break a layout’s realism. Luckily for my era, Route #3 wouldn’t have been nearly as busy as it is today, hell it probably hadn’t even been paved to long before- there won’t be any vehicles on it, and that won’t look out of place. I’m thinking a car or two parked at the station, a truck parked at the warehouse, a tractor and potato trailer along the siding and maybe an abandoned truck in the corner of a farmer’s field will be sufficient.

The Erratic and Wandering Journey

Musings on my Model Railroading Addiction

A mad model railroaders adventures in modelling Toronto's Liberty Village in the 1950's.